The newest trend for 2021, ‘astro tourism’ at Durdle Door is already taking off. This is essentially a re-branding of taking a holiday for the purpose of stargazing, night photography and connecting to nature through observing dark, starry skies.

The reason why you might choose to specifically go on holiday for this purpose is simple: dark skies aren’t everywhere, and in a lot of places the world over, it’s not a simple case of just looking up when the sun goes down. Light and air pollution in cities and towns contribute to lower visibility of the stars and moons which surround us, meaning some people may never have seen more than a few stars. Luckily, here on the Jurassic Coast, we benefit from great visibility resulting in incredible photos.

Astro tourism isn’t just about fancy photos, and it definitely doesn’t have to cost a lot: indeed, part of the appeal of astro tourism is how accessible it is. Camping or glamping make your stargazing experience a fun way to engage kids with nature, provide an escape to the country and can be brilliant for your mental and physical wellbeing. We are all desperate to connect to natural environments more often in our daily lives, perhaps more than we realise.

In the days of social distancing, being outdoors with few people around you also sits well as a covid-secure part of your staycation.

Durdle Door, on the Jurassic Coast, is already a famous hotspot for astro photography. You may have seen shots like these before: 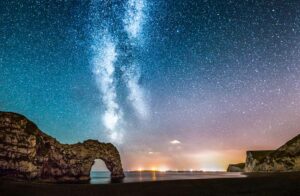 Or maybe you have seen night sky photography at Lulworth Cove, like this one:

Where are the best Dark Skies in Dorset?

As part of our dark skies commitment, the lighting on the Holiday Park is low level. Since we sit so remotely next to the coast, there is no light pollution from neighbouring towns or cities making it the perfect environment for seeing or capturing the starry skies- while still being under 3 hours from London.

When is the best time to go stargazing?

Set your reminders according to the Space Calendar to have the best chance of securing accommodation for the event you’d like to see, but here are some of the best:

April 6: Conjunction of the moon and Saturn. The waning crescent moon will swing about 4 degrees to the south of Saturn in the dawn sky.

June 10: An annular solar eclipse, also known as a “ring of fire” eclipse, will be visible from parts of Russia, Greenland and and northern Canada. Skywatchers in Northern Asia, Europe and the United States will see a partial eclipse.

Aug. 2: Saturn at opposition. The ringed planet will be directly opposite the sun in Earth’s sky around the same time that it makes its closest approach to Earth all year. This means it will appear at its biggest and brightest of the year. Saturn will reach its highest point in the night sky around midnight.

Where is good for camping and stargazing in Dorset?

In terms of where to stay, we have ideally located accommodation in camping and glamping,  Lulworth Holiday Cottages and Luxury Holiday Homes, giving unrivalled access to Durdle Door at any time of the day or night.