Learn more about our resident rooks…

The Rookery here at Durdle Door Holiday Park forms part of the beautifully varied landscape, sheltering our camping area and parts of our touring and glamping accommodation. It is home to our resident rooks who favour the tall canopy trees, surrounded by open agricultural land, for raising their young.

Rooks are intelligent, sociable birds, collecting in groups to form communal rookeries. They are a resident species, largely keeping to the same rookeries where the climate permits them to do so.

The rook has a particularly distinctive call, which actually forms the basis of its English name. Rooks have different pitched calls for different uses; you may well notice that birds in flight produce single calls, whereas those that are perching sound multiple calls consecutively.

Rooks mate for life – they form a life-bond and work together with their mate to build their nests and raise their offspring. They build their nests from surrounding material, often utilising the remanence of last year’s nest, and even stealing parts of other nests in the rookery!

Nesting season occurs around late March to April time each year, with the newly hatched young fledging after around a month. During the time between fledging and becoming independent in flight, the fledglings still depend on their parents for food. You may see these fledglings hopping around under the trees – but rest assured, they are still being looked after!

During the autumn, the birds born in the summer congregate with those from the previous seasons who are yet to pair up – it is at this time of year that the birds perform aerial displays. 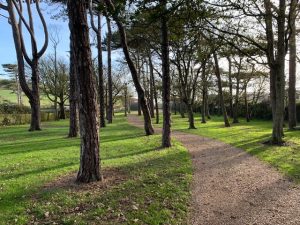 Though widely considered a nuisance, particularly in relation to agricultural practices, rooks are important in controlling ground pests. They are intelligent, problem-solving birds, a step ahead of some of their counterparts when adapting to changing environments. The Wildlife and Countryside Act 1981, among other legislation, helps to protect these birds and their habitat.

Although they may make noise and drop unwanted gifts below, our Rookery is a well-established and important part of Durdle Door Holiday Park and the local wildlife.

If you’d like to read more about the rooks, check out some of the pages below: